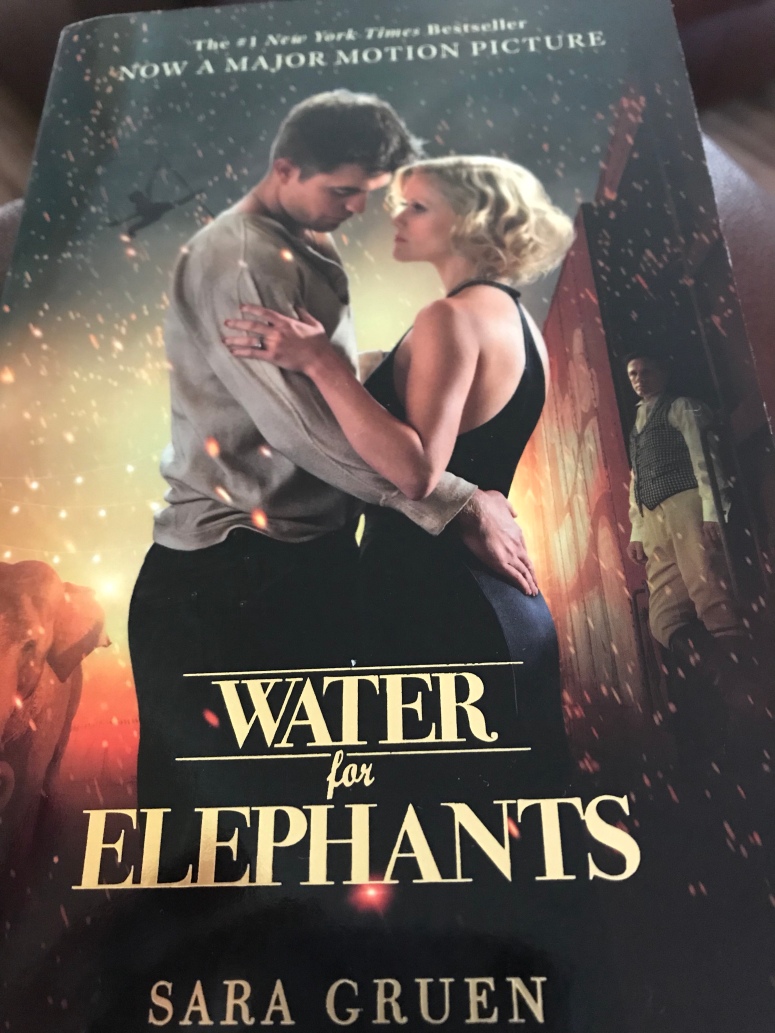 Welcome back to our little book club!! I know that I said that it would be one post per month, but once I started reading again, I could not stop. I visited my local Oxfam and picked up five books to read.

I laid them all out in front of me, and studied the books carefully. I decided upon Water For Elephants.  The novel is written by author Sara Gruen and is her third novel. The drama revolves around a circus in 1930s America.

The novel was written for National Novel Writing Month which takes place from November 1st to November 31st. The National Novel Writing movement has been going since 1999, and started off with just 21 people writing and over the years the people taking part has jumped to a massive 431,626 each year! One day…………one day I’d like to take part but for now, I think I will just read them, until I have worked up the confidence to put my writing out there!

The novel is 331 pages long. I will admit that I had not heard of the author, however with my self confessed expert knowledge of Hollywood I knew that there was a movie with the same name. Let’s be honest, it had Reese Witherspoon in it, so of course I knew about it!  Did I mention that I love Reese Witherspoon?!

One of the quotes on the back of book is by Susan Cheever who writes ‘ This masterpiece of storytelling is a book about what animals can teach people about love.’ I agree! We spend so much time focused on ourselves, that if we just took a step back, we would see that animals can teach us about ourselves. Gruen shows this by using the circus animals intertwined with the characters lives in magical ways.

The novel opens with a prologue which immediately sets the scene for the rest of the drama. We are introduced into the small town atmosphere and within in the first few pages we are told that something bad is happening- ‘the disaster march!’ Jacob, our protagonist, is worried about Marlena, and that he is desperate to find her. ‘It’s a stampede!’

Jacob searches the big top looking for Marlena and spots her committing a murder. The series of events that happen next, Jacob has never told a soul in seventy years.

In the next chapter, we meet an aged Jacob -‘I am ninety. Or ninety three. One or the other’ He describes how the aging process took hold of his life and that he is in an elderly peoples home. My heart dropped reading the first chapter. The desperation that Jacob feels is so real through Gruen’s writing. He describes himself as a ‘rarity’ as an ‘old man among a sea of widows whose hearts still ache for their lost men.’ He feels as though he is the only one with his whole mind and self still intact. He notices that the women are ‘acting like jailbirds’ watching something at the window. He sees that the circus is back in town, and collapses.

He is then ‘engulfed by nurses’ and explains to one that he is misses his wife and her home cooking. His thought process is interrupted when Jacob overhears another male resident telling the other residents that he used to carry water for the elephants in the circus, and the two men argue. The nurses tell Jacob off and wheel him to his room. One of the nurses questions Jacob over the argument and he reveals that he used to be in a circus, and that it was him that really did carry water for elephants.

It is at this point in the novel, that we learn that Jacob’s wife died of cancer after 61 happy years together. The nurse with him, Rosie, shows him that she cares for him by sharing her food with him, as he hates the food there. He reveals to the readers that ‘being the survivor stinks’ and the only thing he can do in the home is ‘put in time waiting for the inevitable, observing as the ghosts of his past rattle around my vacuous present.’ Ghosts have ruined his life.

In the next chapters, we time travel with Jacob and the other characters in the novel. We meet a 23 years old Jacob at Veterinary college, lusting over Catherine Hale.

In a matter of moments, his whole life changes for ever, as he is informed that his parents have passed away in a car crash. He has been orphaned at 23 years of age.  I found the next few pages horrific to read, and I was sobbing mess on the sofa. Gruen’s description of Mrs Jankowski body is awful.  Although it is well written, I found it hard to read.

His parent’s lawyer tells him that he is penniless due to his father not taking any payments for his services. There is no money, no house and no surgery.

As readers, you are able to feel his pain and just how scared he really is. He walks out of his last exams in turn ruining his future dreams. He runs away from his old life and is going to start afresh somewhere else. He hears a train coming towards him and jumps aboard, after a few bumpy moments, he discovers that he is going to be joining the circus!

After I started reading the next chapters, I could not put the book down! He doesn’t know what he is doing or where he is going. Literally! The circus life envelops him and he is drawn further into their life. In chapter four, Jacob and the readers meet Marlena, and he cannot stop thinking of her. She dances with her horses in the circus and is married to August, who is described as a brute, and not a nice man. Marlena is loving towards August initially but behind closed doors, the truth is revealed. He is emotionally abusive towards her, and controls her. This relationship will become everyone in the circus’s undoing!

Jacob eventually becomes the circus’s vet and he becomes involved even more closely with Marlena, and some new characters are introduced to us.

I don’t want to spill any more beans but this is one book that you truly do really need to read. The writing is incredible and you really feel like you are there with them. I cried so many times reading Sara Gruen’s novel. She brings you so far into the world of ‘The Benzini Brothers Most Spectacular Show On Earth’ that there is no going back. The characters are firmly engrained in your mind.  You are made to root for the characters, and you are willing them to succeed.

If you love romance, drama and animals then this is the book for you. It has it all! I truly never thought that I would enjoy a book about a circus but I LOVED this one! Now, I have read the book, I cannot wait to watch the film!

Now there is sexual elements in this books, ( sorry mum!) so I do recommend that if you are under the age of 18- don’t read it without parental permission! There is also some animal abuse, so please do not read this book, if you know that it will affect you whilst reading it.